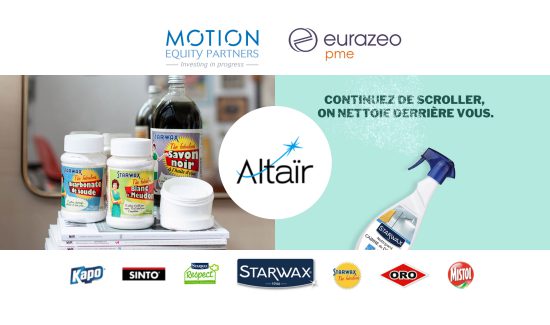 Motion Equity Partners announces the signing of an exclusivity agreement with Eurazeo PME for the disposal of its shareholding in Altaïr Group.

Founded in 1946 by the Brunel brothers and located in Wasquehal near Lille, Altaïr is a leading European manufacturer and marketer of specialty home care and cleaning products with revenues of €105m (2019) and 400 employees. The Group owns a portfolio of 5 iconic brands, leader on their respective segments, benefiting from a high degree of customer awareness and loyalty:

In France and in Spain, the Group’s two main geographies, these brands are distributed in DIY stores, hyper and supermarkets and in traditional/independent stores, as well as through different online channels (e-commerce platforms and the Group’s website Mamawax.fr). Altaïr also distributes its products in more than 50 countries (mostly North Africa and Eastern Europe), total Exports representing more than 25% of the Group’s revenue. The Group relies on 400 employees and 3 production sites based in Noyelles-lès-Seclin near Lille, in Aubagne and in Valencia (Spain).
Funds advised by Motion Equity Partners acquired Altaïr in 2016 alongside its Management team, with the project to accelerate its international expansion (by then, sales outside of France represented only 10% of the Group’s activity). Since then, Motion Equity Partners’ team has actively supported the Group in the implementation of an ambitious growth project, through both organic and external growth.

Under Motion Equity Partners’ ownership, Altaïr completed three cross-border acquisitions: Enteco (2016) in Belgium, Oro (2017) and Mistol (2020) in Spain. Oro’s transforming acquisition in Spain allowed Altaïr to make a major step-up, becoming a true European leader in household care products while benefitting from significative commercial and industrial synergies. This acquisition was an opportunity to strengthen the Group’s governance, with the recruitment of Etienne Sacilotto as Group General Manager. The acquisition of Mistol in 2020 allowed Altaïr to reinforce its presence in Spain and strengthened its M&A track-record. Since 2016, Altaïr has proven to be a unique consolidation platform on a still highly fragmented European market.
Motion Equity Partners has also supported Altaïr in its organic growth initiatives, with the penetration of the French retailer Monoprix, the development of e-commerce (including its owned website Mamawax.fr) as well as the launch of ecological product ranges such as Starwax Respect or more recently the deployment of a Bulk offer. The Group is now a diversified player, generating almost 50% of its revenue outside of France and is ideally positioned to keep growing on its markets.

Finally, Motion Equity Partners is proud of having contributed to the deployment of an ambitious CSR strategy, aiming at reducing the Group’s environmental footprint, promoting more eco-friendly products as well as promoting workplace well-being. For instance, the Group completed its first Carbon Footprint Assessment in 2018 (scope 1, 2 and 3), and, more recently, endorsed a major project, The SeaCleaners, to contribute to the fight against plastic pollution in oceans. Altaïr also joined the Fret 21 initiative which aims at better factoring transport-related impact in sustainable development strategy.

Patrick Eisenchteter, Managing Partner at Motion Equity Partners, stated: “Since our initial investment in 2016, Altaïr has made a great step-up to become a true European leader in branded household care products. We are proud to have contributed to this success at the instigation of Jean-Pierre Dano, notably through Altaïr’s first cross-border acquisition (Oro, Spain) which has significantly strengthened the Group and laid the ground for the current growth project carried-out by Etienne Sacilotto and his team. We are delighted to hand-over to Eurazeo PME, which we believe is the right partner to the Group and its Management team in order to pursue its growth story, both organically and through buy & build.”

Etienne Sacilotto, Altaïr’s General Manager, declared: “We would like to thank the Motion team for their decisive contribution to the Group’s development. Notably on the M&A front, but also for the quality of our day-to-day exchanges on more operational issues, as well as for their strong support and awareness regarding both digital and CSR issues. The entire Altaïr team is delighted to engage in a new chapter with a sponsor such as Eurazeo PME, which shares the same values and which will bring its financial means and expertise support and accelerate Altaïr’s growth.”

Jean-Pierre Dano, Altaïr’s President added: “In 2016, Altaïr’s Management team chose Motion Equity Partners for its strong expertise in international ‘Buy & build’. Together, we have succeeded in transforming Altaïr into a true sizeable European leader. Motion’s team also played a major role in the acquisition of Oro, in both sourcing and execution phases. Motion Equity Partners’ experience has also been instrumental to structure a consistent post-merger integration approach and to implement the necessary evolution of the governance of the Group which has almost doubled its size. I have also prepared my departure from Altaïr, with the set-up of a seasoned Management team. I will be delighted and reassured to see Etienne Sacilotto become Group President and CEO, and I believe Eurazeo PME is the right partner to support him and Altaïr in the next development phase “.