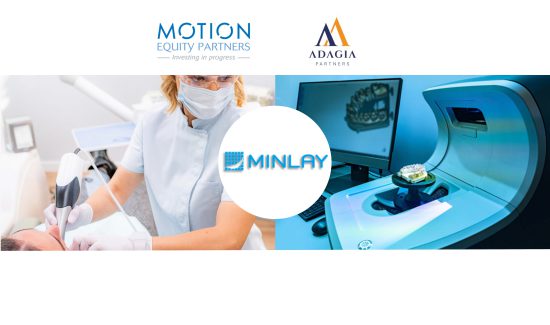 Motion Equity Partners is pleased to announce the signing of an exclusivity agreement with Adagia Partners for the disposal of Minlay Group.

Founded in 2006, Minlay is a major European player and the French leader in the design, manufacture and distribution of dental prosthetic devices. Located in France, Germany and the Netherlands through its 16 laboratories and 12 brands, the Group employs approximately 440 people. Minlay mainly targets a client base of independent dentists, but also dental centers or networks of dental centers, for whom the Group designs devices ranging from fixed prosthetics (to replace one or several teeth) to removable devices (to replace several or even all teeth).

The Group’s custom-made prosthetic devices are manufactured using the latest generation of equipment and technologies and Minlay is able to meet dentists’ highest requirements in terms of product quality and traceability thanks to a unique know-how and organization.

Funds advised by Motion Equity Partners acquired Minlay in 2017 alongside its Management team and its founder, with the ambition to support an ambitious growth project, with a commitment to further expand its regional footprint and invest in technology. Since then, Motion Equity Partners’ team has actively supported Minlay in its development, relying on both organic and external growth.

Under Motion Equity Partners’ ownership, Minlay carried out nearly 20 external growth operations, growing revenue five-fold between 2017 and 2022 and allowing for the creation of 6 regional hubs in France where the Group has become the undisputed market and technological leader. Since 2017, Minlay has also initiated the acceleration of its international development with a first acquisition in Germany at the end of 2020.

Motion Equity Partners is also proud to have supported the deployment of an ambitious CSR strategy aimed at improving employee well-being and reducing the Group’s environmental impact. The Group’s massive investment in the digitalization of production processes has notably allowed to improve working conditions in labs and to reduce carbon footprint.

Minlay is today ideally positioned to further accelerate its development, both in France and in the rest of Europe.

Cédric Rays, Managing Partner at Motion Equity Partners, stated: “Since our initial investment in 2017, Minlay has scaled-up to become the undisputed French leader in the manufacture and commercialization of dental prosthetic devices. We are very proud to have supported this transformation, particularly in the execution of an ambitious external growth strategy that resulted in nearly 20 acquisitions over the past 4 years. We are very happy to hand-over to Adagia Partners, which we believe is an ideal partner to support the Group in its European development.”

Eric Darrou, CEO of the Minlay Group, added: “We would like to thank the Motion team for their decisive contribution to the development of Minlay. We have been very happy to share this entrepreneurial adventure alongside them. The Group is now ideally positioned to accelerate its growth, both in France and in the rest of Europe, in a resilient and fragmented European dental prosthetics market. Minlay’s team is delighted to welcome another high-quality sponsor such as Adagia Partners, with whom we share the same entrepreneurial mindset and which will be able to support us actively in our European development, especially in Germany “.