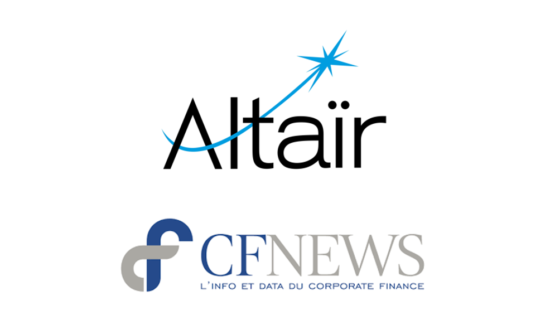 Paris, June 8th  2018 – This prize, rewarding the acquisition of the Spanish company Quimicas Oro completed in November 2017, was awarded to Altaïr Group during a celebration which took place on May 31st , 2018 in front of more than 450 company officers and corporate finance professionals (investors, lawyers, counsellors and M&A advisors).

Each year, the CFNews jury selects a set of French companies who stand apart, within their respective categories, thanks to their outstanding external growth track record.

“We are very proud to receive the External Growth CFNews award, it rewards a strategic operation and a major step in the development of Altaïr Group. Quimicas Oro’s acquisition allows us to reach a critical size in Spain and offers significant synergies potential. Since the completion of the acquisition, our teams have been working on the industrial optimization and the commercial development of the new Group. This acquisition is also the opportunity to optimize our industrial tool and to reinforce our Top Management team, which is necessary for both the proper integration of Quimicas Oro and to prepare the future acquisitions”, said Jean-Pierre Dano, CEO of Altaïr.

“The acquisition of Quimicas Oro is a key step for Altaïr since it is its first transforming acquisition, let alone the first out of France. It is the result of an intensive work alongside Altaïr’s Management team on the M&A front since we invested two years ago in Altaïr. Alongside the integration of Quimicas Oro in the Group, we have sharpened the Group’s M&A strategy and we are actively looking for new opportunities in Europe on the household care and insecticides markets”, stated Patrick Eisenchteter, Managing Partner at Motion Equity Partners.

Based in Wasquehal near Lille, Altaïr Group is now a major player in the manufacturing and marketing of home care, cleaning products and insecticides in Europe. The Group’s offer, which counts more than 3,500 SKUs for a turnover exceeding 110 million euros, is built around four brands leader in their segment:

The Group has a premium industrial tool with two main production sites in Noyelles-lès-Seclin near Lille in France and in Valencia in Spain.

Quimicas Oro was acquired on November 10th, 2017 from its founding family. Founded in 1955 and based in Valencia, Spain, Quimicas Oro is a Spanish company specialized in the production and distribution of insecticides, detergents and cleaning products, under its “oro” brand. A regional leader in Iberia, where it generates c.60% of its sales, Quimicas Oro’s products are distributed in national and regional chains and traditional drugstores in the region. The Company is also present in Northern and Western Africa, with total exports representing 40% of sales. Quimicas Oro counts about 100 employees and generates a turnover of over 40 million euros.

In order to support Quimicas Oro’s integration and the step-change of the Group which became a major European leader, Altaïr decided to strengthen its Top Management team with the hiring of Etienne Sacilotto (ex-Spotless) as General Manager and Julien Delesalle (ex-Datawords) as Group CFO.

Etienne Sacilotto, 53, is a consumer brands specialist. After 30 years in top management positions as Marketing Director and Vice-President in consumer goods leaders such as Unilever, he joined Spotless Group – a producer of care products and insecticides today owned by Henkel – in 2010 as Vice-President responsible for the Marketing and the International Development. At Spotless (at that time owned by private equity firm BC Partners), he contributed in restoring the Group’s growth by completing 4 strategic acquisitions and by accelerating its international development.

Julien Delesalle, 41, began his career within Bel Group in 2006 after a first experience as an auditor at EY. In 2009, he was promoted CFO of Bel Group’s Ukraine subsidiary. In 2012, he joined Datawords – an international provider of digital services – as Group CFO. At Datawords (which was owned by private equity firm Capzanine, and then by Keensight and Cathay Capital), he organized the Finance Department and supported the international growth of the Group by opening several subsidiaries in foreign countries. He also completed several external growth operations.

These recruitments should further enable the international development of Altaïr Group through external growth. The Group is actively looking for new external growth opportunities, mainly in France, Germany, Benelux, Italy, Poland and the United Kingdom, targeting strong brands of care products and insecticides.